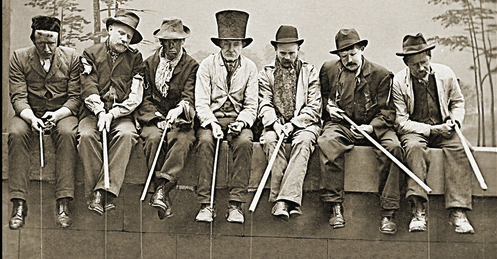 Back when I was a young boy growing up in our Southside neighborhood, we had a lot of men who would ring our back doorbell asking if they could have something to eat. The Great Depression and World War II made for a hard time for many people. So from 1929 until around 1946 there were plenty of men who decided to leave home and try to find odd jobs in other parts of the country. Some were just leaving their hometown for the adventure of life. The call of the open road in this case was the railroad.

Railroad tracks went everywhere throughout the USA. These meandering folks, who were given the label of “hobo”, found free transportation on a train by climbing aboard an empty boxcar and riding free to the next town. At this point I might add that the hobo, as a character on the American scene, has been around since the Civil War….but that is another story to tell.

I first remember the hobos coming to our back door at 306 West Locust Street when I was about five or six years old. Mom would always give them some of our meal that was being prepared, or as was usually the case, they came in the afternoon, and she would fix them a sandwich. They, or usually he, would sit on the back steps or in the shade of the wild cherry tree to eat their meal. The men (I never saw a woman or younger person) were always quiet and polite. Some would offer to do some yard chores in exchange for food; but for the most part, they just wanted something to eat.

I never thought much about these back-door visits at the time. Since my world was my neighborhood, if I did ask about them or think on it, I suppose I thought this occurrence was as it should be. On the contrary, later in my life, I came to the realization that these vagabond wanderers were a unique group. Not only did they pursue adventure, freedom (and some job searching), but also they were getting a different taste of life…..a taste that was deliberately sought after.

I’d like to take your thoughts back to the years of WWII and up to the 1950’s. I suppose those were the years I best remember the local hobos. I guess I was a high school senior in 1953 when I wondered if the hobos who came to our back door also knocked on the doors of my next door neighbors. I asked around and found that many of my neighbors were visited by these travelers but some were not.

Through my readings I stumbled across a magazine article that mentioned secret symbols used by hobos to communicate with one another. Since then I have gathered many more signs. I felt that I had discovered why hobos knocked on some doors in my neighborhood but not on others! Take a look at the illustrations with this article. Earlier hobos in a town would leave these symbols in special places so those coming through later would benefit from their knowledge or warnings and any help available. This saved a lot of unproductive knocking on doors.
Traveling hobos through my West Locust Street youth must have been left such markings to indicate Mom provided a place to sit and cool off and a much-appreciated sandwich!

There are no birthdays today